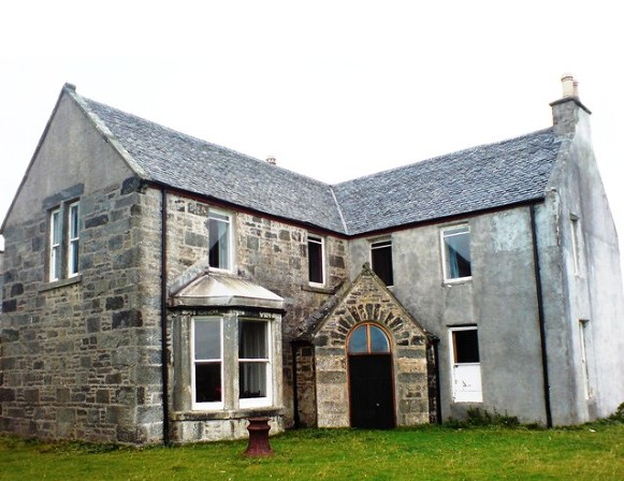 ​The 5th Earl of Dunmore had bought the Harris estate from the MacLeod clan in 1834, the purchase including the Isle of Ensay. By 1856 Lord Dunmore had sold Ensay to Archibald Stewart. One of Stewart's descendants, Jessie Scott, about whom more later, was the mainstay of the restoration of the church in the early 1900s, but she had died in 1931. So it was not until 1956 that John David purchased Ensay House, and it has remained in his family's ownership ever since. 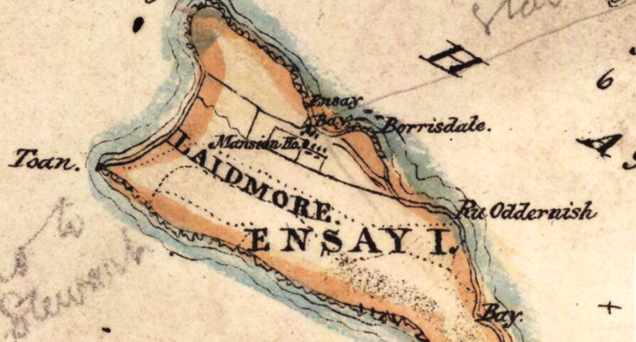 Extract fom William Bald's Map of the Harris, 1805, clearly shows the Mansion House on the site of the current Ensay House. Reproduced by permission of the National Library of Scotland
Ensay House is approached by a few steps directly leading up from the beautiful white sands of the beach at Ensay Bay. Wiilliam Bald's Map of Harris, of 1805, clearly shows a Mansion House on this site. Undergoing major alterations and improvements in the 19th century, Ensay House was substantial enough to be described as a 'Gentleman's seat' in the census of 1851.

By the 1870s, [Ensay House] had 14 rooms with one or more windows. A visitor described the dining room walls as                 covered with "guns and rods, skulls and tusks...devoid of all ornament but the instruments and trophies of the chase." ¹

John David died in 1979, but his family are still visitors to Ensay House. In 2012, the photographer John Maher took a series of iconic photos of the interior of Ensay House, for part of his exhibition called Leaving Home, some of which may be viewed here. They show details of a life long past, frozen in time, and now perhaps ripe for renovation.